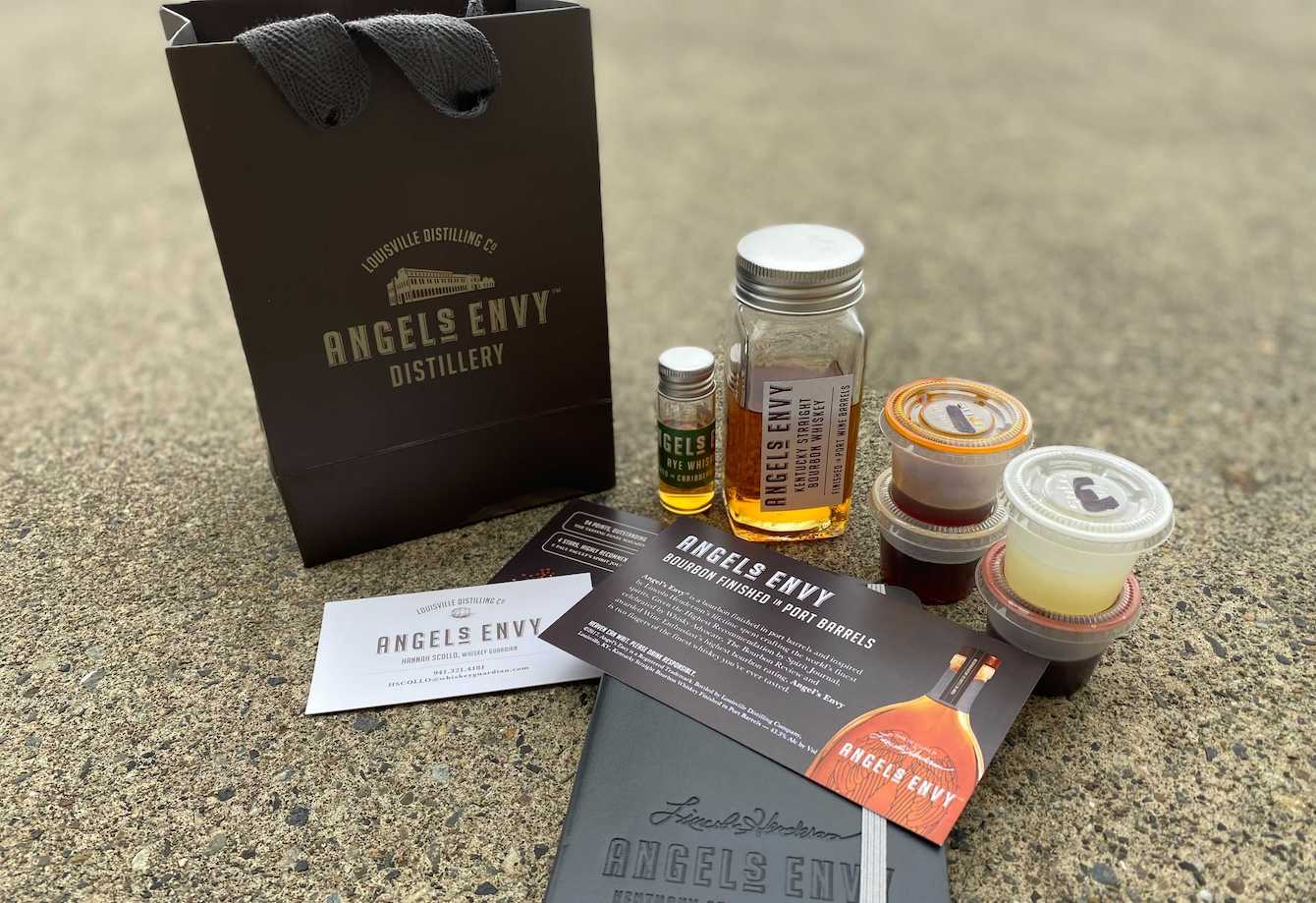 This year’s holiday party was a little different than usual. For one thing, I spent the entire time sitting alone in my living room, staring at my computer. For another, I showed up in leggings.

And yet, it was a roaring success. Even though we couldn’t have our holiday party in person this year, it was still a hit, receiving accolades from employees like, “super fun holiday party!!!!” and “BEST. PARTY. EVER.”

After kicking off the festivities with a few words from our fearless leaders, we hopped right into the fun stuff.

We started by breaking into three separate activity tracks: painting, cocktail making, and virtual escape room-ing. Then we reconvened for some holiday trivia and a special performance from our in-house rapper (Kendall—you’re a star).

Keep reading to see what we did to keep that feeling of togetherness alive, despite not actually being physically together. 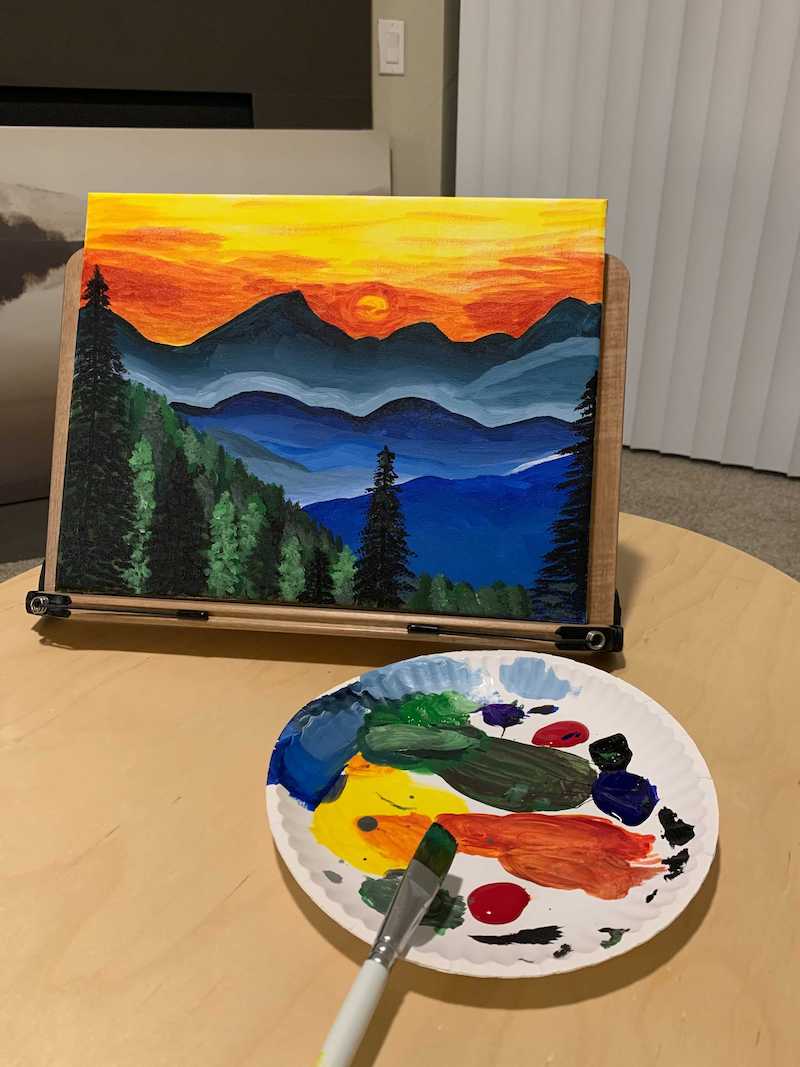 After breaking off of the main group, about a third of the company poured themselves a glass of wine, pulled out their paintbrushes, paint, and canvases, and got to work on their masterpieces.

An artist entertainer from Bottle and Bottega gave everyone live remote instructions on how to paint their landscapes, and in just about 45 minutes everyone had finished—and wow-ed the rest of us with their artistic ability. 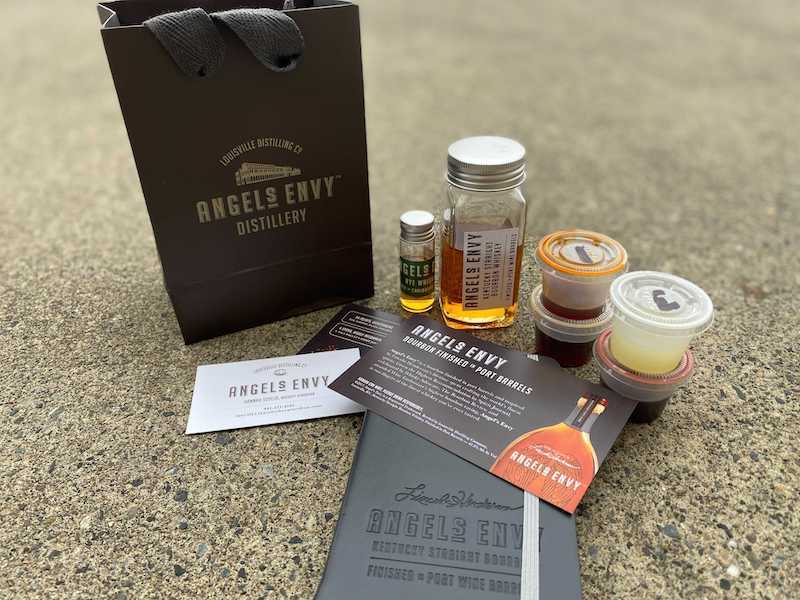 We invited Portland Whiskey Guardian Hannah Scollo to lead the team through a cocktail making class via Zoom! Everyone had the opportunity to make three different cocktails—The Lion’s Tail Classic, the RFPIO Holiday Lion’s Tail, and Angel’s Rye Daiquiri. If you’re interested in trying these out on your own, here are the recipes! 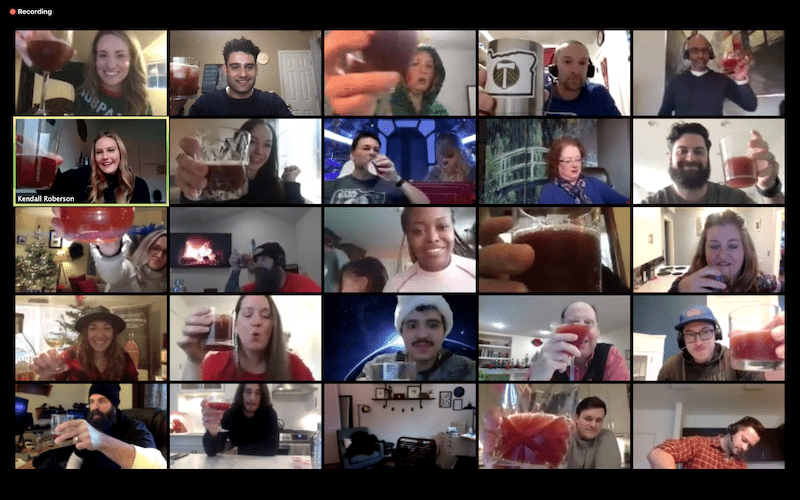 We worked with Green Hat People to set up a virtual escape room for the rest of the team.

The premise: A hacker has locked your company files. Can you unlock them in 45 minutes? But the hackers are not motivated by cash, their agenda is more philosophical. If you and your team can prove your worth, they might relent!

Luckily, all four of our escape room teams managed to prove their worth and won the files back from the hackers.

After everyone finished their activities and reconvened in the main room (those who had attended the cocktail class were a bit giddier than usual), and we proceeded to the next activity. We used sli.do to facilitate our 30-question holiday trivia activity.

We asked questions like, “What year did Santa Claus first appear in a Coca-Cola ad” (1931) and “Do Americans buy more fake Christmas trees or real Christmas trees” (fake—a big disappointment to those of us based out of Oregon).

Last but not least, we wrapped up the holiday season with some giving.

First, we donated $25 for each person who attended our cocktail-making class, equalling a $675 donation to a family in need through the Christmas Family Adoption Foundation.

But we decided that wasn’t quite enough… so we decided to also raise money for charity through an employee-driven #RandomActsOfKindness initiative.

Employees posted their #RandomActOfKindness in our internal Slack channel; for each act, RFPIO donated $10 to charity—adding momentum to the movement.

RFPIO employees got very creative with their kindness, doing things from donating food to the food pantry, giving plants to neighbors, donating to charity, and handing out food and other supplies to the homeless.

Through this initiative, we’ve raised an additional $100 for charity, splitting the proceeds between the Christmas Family Adoption Foundation and GlobalGiving’s initiative to Transform Outcomes for Children in India. 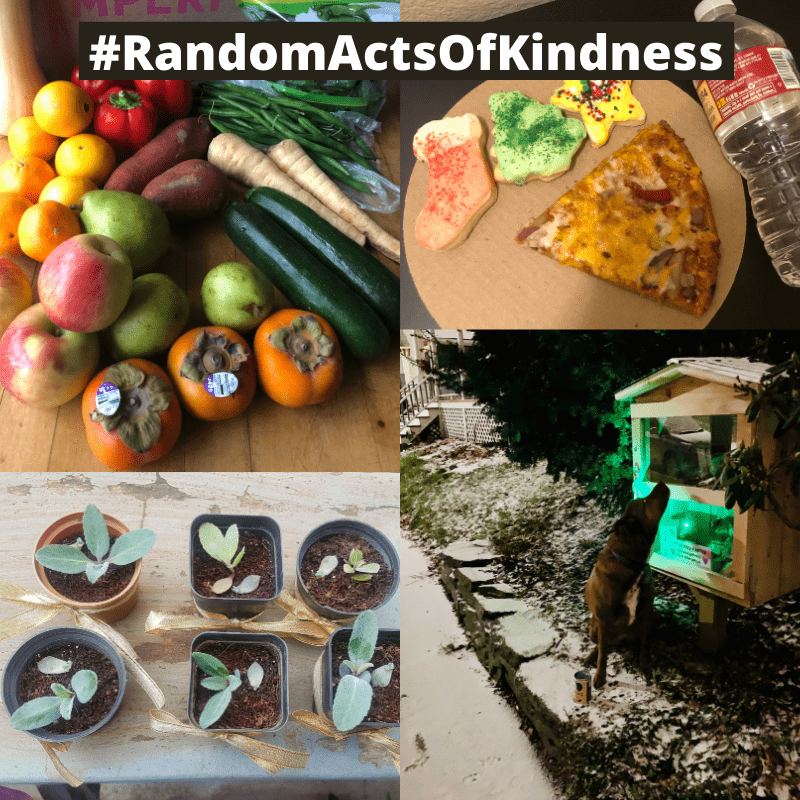 And that’s a wrap!

I may be biased, but this was easily one of the best holiday parties I’ve ever been to. We definitely couldn’t have done it without our party organizing extraordinaires, Bonnie McDougal and Kelsey McFarlane.

But we also couldn’t have done it without such a great team. I think I speak for everyone when I say I’m grateful to work alongside so many supportive, helpful, kind, and hilarious people, who both take their work seriously… and also like to hang out and have fun.

With that, the team at RFPIO wishes all of you a wonderful holiday season and smooth slide into the new year.

P.S. If cocktail making and virtual escape rooms sound like your cup of tea, we’re hiring!